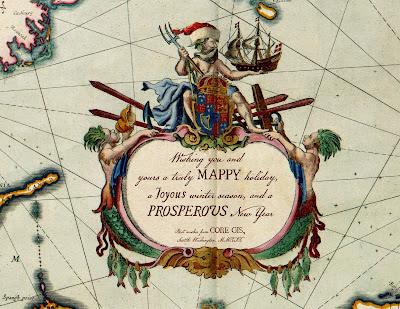 One of the many excellent organizations I get to work with is the Sightline Institute, based here in Seattle. They are a think tank focused on urban sustainability, social justice, and environmental health.

They ask interesting questions, and every once in awhile, they will ask me to help them answer these questions with maps. In June, I was asked by Alan Durning to make a geographic comparison between three Northwest cities and three European cities:  Seattle and Paris, Vancouver and Barcelona, and Portland and Vienna. His article, "What Would Our Cities Look Like if We Took Our Climate Change Values Seriously?" is thought provoking and makes some good points about the disconnect between the way we in Seattle talk about fighting climate change and the land use and transportation policies we actually put in place.

Making these comparisons was fun, but finding the data for five different countries was not always straightforward. I obtained data from a number of government sites, but the excellent Boundary.Now and OSMexport tools ultimately proved to be the most useful.

The maps themselves were very simple to make once I had the data--each required three layers:  the city boundary, waterbodies/rivers, and parks. Since we are comparing the size of these cities, I used the Europe Albers Equal Area Conic projection for the European cities, and the North America Albers Equal Area Conic projection for the US/Canadian cities. The city pairs are displayed at the same scales:

I generated a set of simple maps for each city, shown with its companion below (click to embiggen): 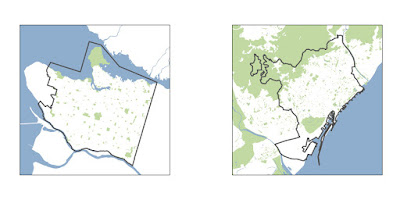 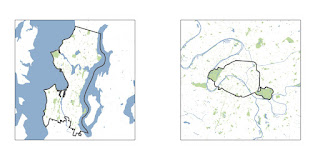 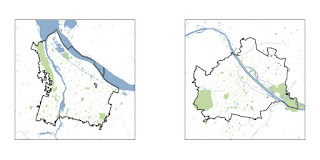 I sent these files in Adobe Illustrator to the talented Devin Porter, and he worked some graphic design magic to remove smaller parks, rotate Seattle from the original projection so north is oriented up, and produce side-by-side comparisons with labels and stats: 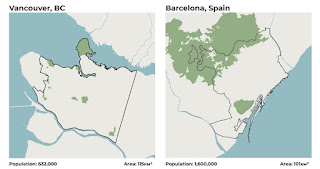 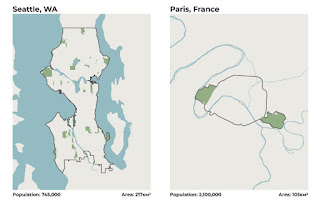 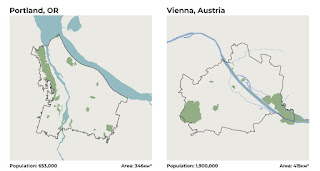 Finally, he extracted vectors from the AI files to create these cool animated GIFs, which are featured in Alan's article:

My favorite comparison is between Seattle/Paris, not only because I live in Seattle, but also because there is such a stark difference between the number of people in each place.

Which comparison made the biggest impression on you?

Yesterday I received my 'cartographer's copy' of the Mount Tahoma Trails Association Trails System Map. I worked closely with Dave Stonington from MTTA to ensure the map was accurate and easy to use. Dave and his colleagues at MTTA had 2,000 copies of this map printed at Printco in Auburn, Washington (the same outfit that prints all of the maps I've worked on for Cascade Bicycle Club).

We worked through seven drafts of this map to ensure we got all of the details right. My favorite part was designing the 'info side' on the reverse of the map. Dave was very open minded and let me take a non-linear approach to presenting a whole lot of information.

Late last year I was asked by Conservation Northwest to produce a map highlighting their work to preserve sagebrush ecosystems in north-central Washington and southern British Columbia, an effort they call the Sagelands Heritage Program.

I worked with Jay Kehne at CNW to consolidate a variety of marked up paper maps to produce a large format (34" x 44") poster showing their area of interest, movement corridors, protected lands, and other features. The map also needed to illustrate which animals inhabit shrub-steppe habitats, so we used silhouette icons and photographs to provide a more complete understanding of the landscape.

This map was a lot of fun to create, and last week it won Best Cartographic Design at the WAURISA Washington GIS Conference! 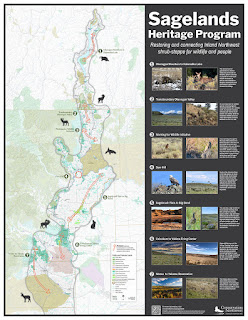 The basemap was created in ArcMap, and exported to TIFF.  In Photoshop, I created a copy of the map within the study area only and placed it above the basemap. I added a drop shadow to the study area with these settings: 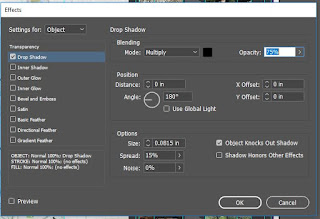 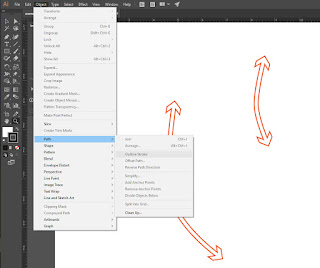 The Photoshop map was placed in InDesign, the animal and arrow Illustrator files were layered on top of the PSD, and text, photos, logos, a QR code, and other map elements were placed on the map.
Posted by Matt at 10:50 AM No comments:

Raise Your Hand Texas is a non-profit educational advocacy group based in Austin, Texas. We worked with RYHT to produce an interactive web map showing the potential changes to school funding under District Partnership Agreements,which enable a school district to be funded similarly to a charter school. This could result in substantially more money for schools, up to $2,300 per student.

We built this map using a custom Mapbox style and the Mapbox GL JS API. The map features a zoom-to-district functionality (in the fly-out on the left hand side), information about each district will appear in a pop-up when a district is clicked, and zooming into the map will reveal individual campuses. Hovering over the campus location will reveal the name of the school.

You can view the interactive map here, or click on the screenshot below. 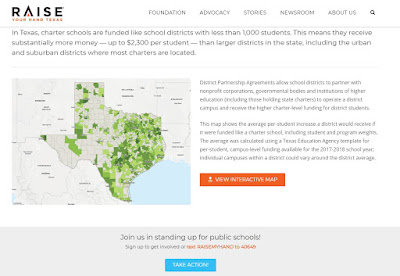 Mineral Withdrawal of the Methow Headwaters

In 2015 we worked with The Wilderness Society on their Methow Headwaters campaign, focused on preventing industrial scale mining throughout the Methow Valley of north central Washington. The immediate threat and the impetus for the campaign was a proposed open-pit copper mine on Flagg Mountain that would have had significant ecological impacts on the Methow Valley.

We produced a series of maps, including some oblique three-dimensional views, to convey a sense of the location of the proposed mine, as well as a proposed withdrawal map.

As a result of the Headwaters campaign there is currently a two-year mining ban in place, and the US Forest Service has recommended a twenty year withdrawal to the Bureau of Land Management. Please consider supporting this withdrawal and the long-term protection of the Methow Valley here. The deadline for comments is Tuesday, November 13th!

The Issaquah Alps Trails Club has been working to preserve open space and access to trails in the Issaquah Alps region for decades. To mark their 40th anniversary, they commissioned me to create a map showing their accomplishments. By advocating for open space protections and working with a wide range of conservation partners, the IATC has been instrumental in the creation of beloved and iconic protected lands such as Cougar Mountain Regional Wildland Park, West Tiger Natural Resources Conservation Area, Tiger Mountain State Forest, and many others. Congratulations to the IATC!