From Images to Data--Image Segmentation 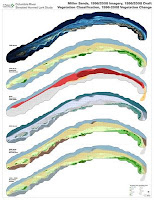 Last year I searched for freely available image segmentation software as an alternative to eCognition. My original search was related to a project that I decided not to pursue; however, this past fall and winter I worked on a project that required image segmentation . So, after doing additional research, I was able to determine that Brazil's National Institute for Space Research (INPE) produced a freeware program called SPRING that does image segmentation. The USFWS worked with INPE to produce an English translation of the software, along with a manual available here. The software itself can be downloaded here.

After working with this software for the better part of a day, I was able to get fairly decent segments out of my imagery, but the classification was not very good. I also found the software difficult and counter-intuitive to use, and although it is ‘translated’ a lot of the menus don’t make much sense.

So I started searching again and found Berkeley Image Segmentation which is great. It is commercial software, but I was able to get the beta release for $900. The creator of the software, James Scarborough, was surprisingly accessible and extremely helpful anytime I had a question about what the software was doing. He has already integrated several of my suggestions into the most recent version, and I’m sure he’ll continue to solicit and incorporate user suggestions. The software is much, much easier to use than SPRING, and it has several classification options built in (K-means, K-nearest neighbor, and neural networks) and while they are better than SPRING they still weren’t quite good enough. James suggests in the ImageSeg manual using WEKA for segmentation classification. This is open-source data mining software, and I used the expectation maximization clustering algorithm with great success, but there are many others available.

I have sample output on the CORE GIS portfolio page, along with a brief description of one of the projects for which I’ve used it (third one from the top).
Posted by Matt at 9:53 AM

Hi Matt,
I just read your post now, 3 years after... :)
I used SPRING in 2008 for a land cover classification and found it satisfying considering also that it's free. The aim of the project was to evaluate the potential of free software for such task. I also find it not so user-friendly and the classification tools didn't give good results. It was also not possible to export the segments and at the same time preserve their statistics. So I classify the image in two phases. The firts with SPRING and the second with GRASS.
The result was surprisingly good! Not as good as the one of my colleagues working on the same project but using the powerful e-cognition, but really interesting. The technique has to be refined.
I'm now working in a project where I will maybe need segmentation again so while surfing on the net I found your post.
Do you know if now there's new possibilities of image segmentation, in particular with free software?
Kind regards
Davide